Tadhgh specialises in all areas of family law. He joined chambers as a tenant in October 2020 following completion of his pupillage.

Prior to law Tadhgh worked as an Actor and an Educational Consultant. He has extensive experience of working with international and high net worth families, as well as those with children who have special educational needs and specific health or religious requirements.

Tadhgh acts in all aspects of family finance proceedings, including matrimonial finance, enforcement, applications pursuant to TOLATA 1996, and applications under Schedule 1 of the Children Act 1989. During pupillage he has observed and helped with complex financial work with his supervisors, including cases concerning non-matrimonial property, trusts, pre-nuptial agreements, religious divorce, and substantial assets Part III claims.

Tadhgh undertakes cases at every stage of child abduction proceedings. During his pupillage he has observed and helped with cases involving the Hague Convention and Brussels II Revised, including on an ex parte basis and contested final hearings.

Tadhgh accepts instructions in private children disputes concerning contact, residence, relocation, and all aspects of parental responsibility. During pupillage he assisted with many complex private children cases, including relocation disputes and families within religious communities.

Tadhgh accepts instructions in public law proceedings on behalf of Guardians, Local Authorities, parents, and other family members. During pupillage he witnessed a variety of cases, including cases concerning non-accidental injury, transfer to another jurisdiction, neglect, and intra-sibling abuse.

He is a highly effective advocate, with great attention to detail in his preparation.

‘It is easy to forget when working with Tadhgh that he completed his pupillage in 2020. I have worked with him on children and finance cases, and his knowledge of the law and ability on his feet in court belie his relatively short experience as a tenant.  Tadhgh is always thoroughly prepared and across all of the detail of the case, which as an instructing solicitor is extremely reassuring. He is brilliant with clients, who feel reassured by both his thoughtful and considered advice and his warm and confident manner. I have no doubt he is a leading family barrister of the future.’ –  Associate, Alexiou Fisher Philipps LLP

‘Tadhgh and I worked together in relation to a privately funded Children Act matter in which we represented a father seeking a lives with order regarding his daughter. There were welfare issues relating to the mother’s care of the daughter and social services had been involved with the family for a number of years. There was a relatively complex factual matrix given the long history to the matter. My client was unable to afford to pay for my attendance at court and, as such, Tadhgh was entirely responsible for managing the client at the four hearings we had (a FHDRA, DRA, Final Hearing (aborted after first day) and Final Hearing). The client was immediately confident in Tadhgh’s abilities and was keen to ensure he continued to represent him. I found Tadhgh to be helpful and well prepared and at the Final Hearing we obtained the orders we were seeking. All of this is particularly impressive taking into account that Tadhgh only became a tenant in October last year.’ – Partner, B P Collins LLP

‘I have worked with Tadhgh on two recent matters, both in fairness more by default than design. Both matters have been Children Act matters. The first matter involved a very difficult and fractious client whose children had been unilaterally removed from his care by the mother. The matter was set down at short notice with only four hours’ notice of the mother’s application to the Court. Tadhgh was available and stepped admirably into the brink. He was unfazed by the timescales upon which we were working and produced an impressive Position Statement for the Court at only a couple hours’ notice. He thereafter represented the client at the return date and the client, who was extremely demanding, described his case preparation as “second to none”. The next matter in respect of which I specifically instructed Tadhgh comprised the return date of a wholly unmeritorious Without Notice application that was made to the Court by a father as a litigant in person whereby he had failed in his duty of candour to the Court so as to secure draconian orders against my client wholly without merit. The father had mental health issues and the mother, my client, was extremely anxious and hard work not least because English is not her first language. Again, the hearing was set at short notice (only two days) and, again, Tadhgh rose to the challenge admirably. He persuaded the Judge to discharge the Without Notice Orders that had been made and persuaded the Judge to make a Costs Order in favour of the client. The client described Tadhgh as “incredible”.’  In respect of both matters, Tadhgh has risen to the challenge at short notice, has not been fazed and his case preparation and attention to detail has been very impressive. – Partner & Head of Family, Griffith Smith LLP

‘I have instructed Tadhgh on 2 Hague Convention matters in the past week. On both occasions he has picked up the papers very quickly and produced excellent position statements and draft orders. He was very well prepared for the hearings and was successful in obtaining the orders sought. I have also instructed him again on another hearing next week. I endorse Tadhgh’s entry for Family Law Young Barrister of the Year.’  – Head of Family Law, Lyons Davidson

‘I wish to write a letter in support of Tadhgh’s application to enter the Jordan’s Family Law Award for the Family Law Young Barrister of the Year. I recently instructed Tadhgh in relation to a complex Children Act application which involved a very volatile client. I was immensely impressed with Tadhgh’s ability to deal with the complexity of the case as well as dealing with the client in a firm but sympathetic manner. I was also immensely impressed with his ability to drive through the Directions that clearly were needed to progress this case. I felt that Tadhgh showed maturity way beyond his age and experience.’ – Head of Legal Practice, OLS Solicitors’  & Head of Legal Practice, OLS Solicitors

‘I would highly recommend Tadhgh Barwell O’Connor from 1 Kings Bench Walk. Having instructed Tadhgh, I am extremely impressed by how quickly he can grasp a case, and proactively consider wider issues which may have an effect on the issue at hand. Tadhgh is friendly and approachable for clients and is able to put clients at ease straight away. You really feel that he cares about the client and the case he is dealing with. He is a highly effective advocate, with great attention to detail in his preparation.’  – Solicitor, Stowe Family Law Esher

‘I instructed Tadhgh in a contested children act case. I was very impressed at his quick grasp of the facts, but also his bedside manner with the client, ensuring that she understood her options and likely outcomes at all points of the Hearing. His quick thinking and pragmatism resulted in the case settling by agreement, allowing the client to have some control over the decision and preventing stressful cross-examination.’ – Senior Solicitor, Stowe Family Law, Tunbridge Wells

‘I am instructing Tadhgh on a private children matter and have been continuously impressed by his efficiency and commitment to the case. Since the very start, Tadhgh has been highly engaged with the case, offering his sound judgement and advice throughout. Tadhgh’s preparation for the hearings have been both thorough and considered and he is always on hand should you require his advice. Owing to the often fast paced and unpredictable nature of children cases, it is incredibly reassuring to work alongside counsel who is on the ball and is committed to providing immediate assistance. I would not hesitate to recommend Tadhgh for any family matter, particularly private children cases.’  – Solicitor, Streeter Marshall LLP

‘ We have instructed Mr Barwell O’Connor during both his second six pupillage and as a tenant of 1 Kings Bench Walk, both with regard to private law children matters and FRO. Mr Barwell O’Connor has been throughout our instruction of him incredibly diligent, attentive, and has dealt deftly and sympathetically with some very vulnerable clients, in difficult circumstances. He has been able to identify and press forward cases with skill and great success including in a particularly acrimonious private law children matter successfully arguing for the appointment of a new Guardian and defeated an application for a s37 report to be conducted.  In this matter he dealt with an anxious mother being accused of alienation with great care and sympathy. In a recent FRO matter he dealt with a very anxious wife who was being subjected to pressure from her former husband and adult children. He was able to support this client whilst ensuring that she achieved the best settlement possible. We would have no hesitation in recommending him for this award.’  – Martin Nossel & Co.

‘I instructed Tadhgh as counsel on a very complex family matter which required careful consideration and a delicate, yet forceful approach, which Tadhgh brilliantly executed. Tadhgh was patient and understanding with our client. He not only listened to the client’s concerns but identified the risks and gave appropriate advice. Tadhgh has proven to be incredibly professional and exceptionally thorough in his work. He provided the client with detailed analysis of the case from a legal perspective and was extremely helpful in answering all my questions in detail. Tadhgh is an excellent advocate, and I would not hesitate to recommend him to my clients as counsel. It has been an absolute pleasure working with him and I look forward to working with him again.‘ – Trainee Solicitor, Landmark Legal LLP 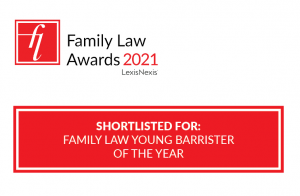